This article explains how to typeset Portuguese: enabling correct typesetting of accented characters, such as ç, ã, é etc., and providing support for language-specific features such as hyphenation. If you are looking for instructions on how to use more than one language in a single document, for instance English and Portuguese, see the International language support article.

We’ll start with the following pdfLaTeX example which you can open in Overleaf using the link below the code.

Open this pdfLaTeX example in Overleaf.

This example produces the following output: 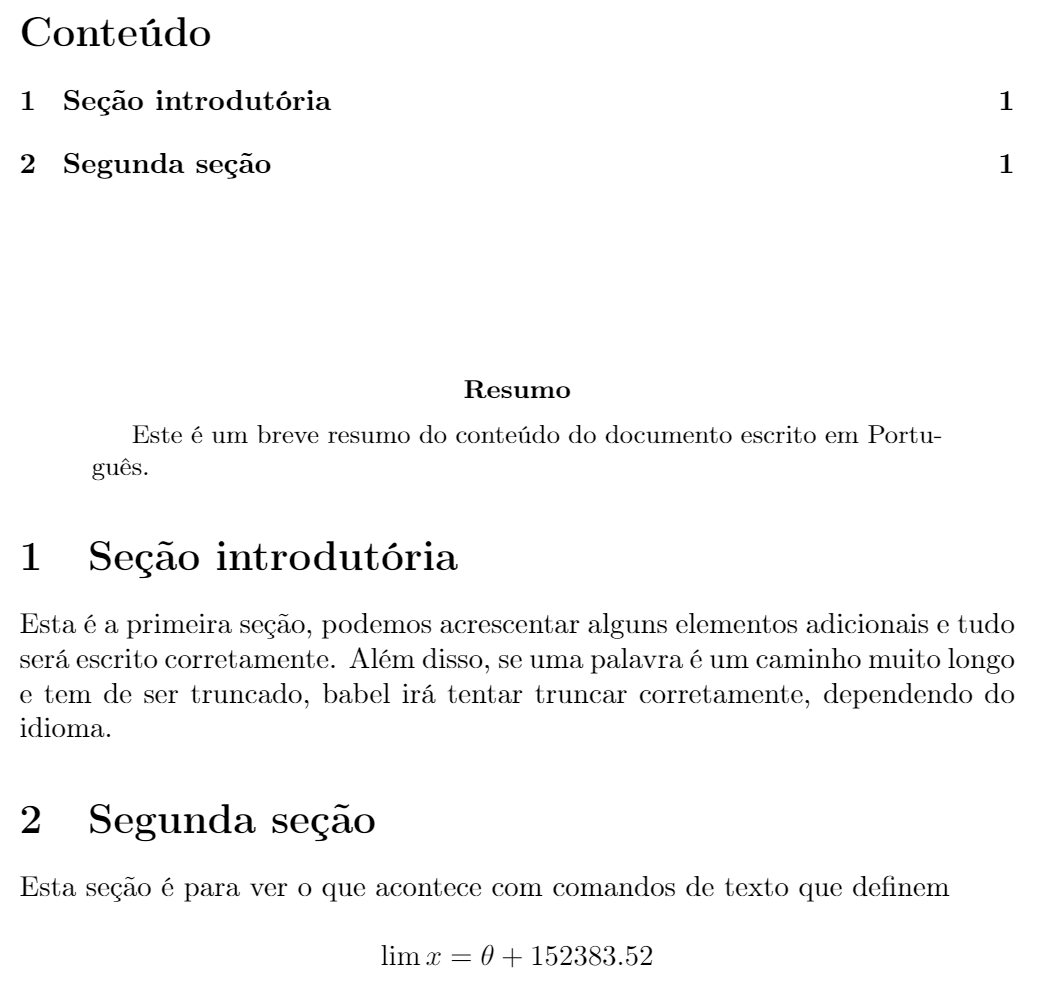 Any text file, such as a LaTeX input .tex file, is nothing more than a stream of numeric (integer) values which are being used as a mechanism to represent characters of text; consequently, processing a text file involves scanning (reading/processing) a series of integer values. However, an important question arises: which set of characters is actually represented by the integer values contained in a particular text file? In other words, how have those integer values been encoded: what is the correct (intended) "mapping" (encoding) from integers in the text file to the corresponding characters they are supposed to represent?

Text files can be generated within innumerable computing environments: across different countries/continents, using a multitude of different devices, operating systems and editing tools. Originators of text files could, potentially, use or apply different text encodings according to local requirements, such as language, when generating and storing the sequence of integer values chosen to represent the individual characters contained in a text file. This may work well if the generated text files stayed within compatible technical ecosystems, which use the same encoding, but what would happen when those files are transferred to completely different environments—because many text files do not contain any information which indicates the encoding used to generate them.

Clearly, the producer (originator) and consumer (user) of textual data must, somehow, agree on the encoding (mapping) being used, otherwise encoding errors are likely to arise due to mismatches between the integer data in the file and the set of characters it is assumed to represent. In addition to correctly mapping text file integer values to characters, any subsequent visual display of those characters requires some form of font that is capable of providing the data (shapes, or even bitmaps) to output a visual representation of the desired characters.

Input encoding: inputenc, UTF-8 and a change to LaTeX in 2018

However, over time, users/software developers moved away from multiple 8-bit encodings to using Unicode and its UTF-8 encoding scheme, which became the de facto option for encoding text files. Prior to 2018, to process UTF-8 encoded files LaTeX document preambles included the line

Readers might observe that the example above does not include the line \usepackage[utf8]{inputenc} in the document preamble: why is that? This is due to an important change to LaTeX introduced in 2018: a switch to UTF-8 as the default input encoding. Documents typeset with pdfLaTeX, and using UTF-8 encoded text, including those created and typeset on Overleaf, no longer need to include \usepackage[utf8]{inputenc} but is does no harm to do so. For further information see the April 2018 issue of LaTeX News and the Overleaf blog post TeX Live upgrade—September 2019. All text files created on Overleaf are encoded using UTF-8.

To correctly typeset characters contained within input files, those characters need to be mapped to the appropriate output shapes (glyphs) contained in fonts used to typeset the document. This “output encoding” is handled by another package called fontenc.

To use fontenc include the following line in your document preamble, using an encoding, such as the T1 encoding, which supports accented characters contained in Latin-based languages:

Using the T1 font encoding, via \usepackage[T1]{fontenc}, has other benefits:

The following chart lists the T1 font encoding. It is reproduced from page 22 of the document LaTeX font encodings which is available on CTAN.

Example of copy and paste

The following minimal example, which does not use fontenc, demonstrates issues with copy/paste of text containing accented characters.

Open this example in Overleaf

switches to using the T1 encoding, which results in LaTeX typesetting accented character glyphs. If you copy the text from the PDF produced by the example above you should see something like this:

Observe how the OT1 encoded text does not contain actual accented characters, whereas the text encoded with T1 does contain them. The result of copy/paste can also depend on the application being used to view the PDF from which you are copying/pasting text containing accented characters.

To extend the default capabilities of LaTeX, providing proper hyphenation and translation of the names of document elements, import the babel package using the portuguese language option.

As you may see in the example using pdfLaTeX, instead of “Abstract” and “Contents” the Portuguese words “Resumo” and “Conteúdo” are used.

If you need to use the Brazilian Portuguese localization use brazilian instead of portuguese as the language parameter when importing babel.

The babel package usually does a good job of providing language-specific hyphenation capabilities, but if a particular word does not hyphenate correctly there are packages to assist. For example, you can add the hyphenat package in your preamble:

The second line is a list of space-separated words with defined hyphenation rules. If you want to prevent hyphenation of a specific word, write {\nobreak word} within your document, or include it in an \mbox{word}.